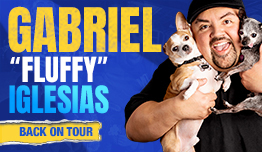 Gabriel "Fluffy" Iglesias: Back on Tour

COVID Restrictions: (required until further notice)
● Face coverings are required for all guests five and older
● Proof of full vaccination OR a negative test within 72 hours is required

Effective November 15, 2021 per state order, all guests 12 years of age and older must show proof of full vaccination against COVID-19 OR proof of a negative FDA-approved molecular (e.g., PCR) or antigen COVID-19 test taken within 72 hours of the event. Rapid at-home tests do not meet these criteria. Please click HERE for additional info.

Iglesias is one of America's most successful stand-up comedians performing to sold-out concerts around the world. He is also one of the most watched comedians on YouTube with almost a billion views and has over 25 million fans across social media. In 2018, Gabe was included in The Hollywood Reporter’s “Top 40 Comedy Players” issue alongside comedy giants Jerry Seinfeld, Chris Rock and Lorne Michaels. The comedian has also had the distinct honor of being one of the few to headline and sell-out Madison Square Garden in New York, Staples Center in Los Angeles and Sydney Opera House in Australia.

Tickets for Gabriel “Fluffy” Iglesias' show at Spokane Arena go on sale to the general public on Friday, December 3 starting at 10am. Tickets can be purchased at Fluffyguy.com or TicketsWest.com.