The Spokane Veterans Memorial Arena has been designed to accommodate significant loading from rigging assemblies. A rigging support grid has been established to carry a large variety of loading layouts. The rigging grid is located approximately at an elevation of 69 feet above the arena floor. The assembly is made up of 4 separate elements:

All members used in the rigging grid are structural steel wide flange (I-beams). Load capacities for these elements are shown on the sheets which follow. See sketch 1 for plan layout of the rigging support grid. See sketch 2 for examples of rigging load applications acting on the grid. 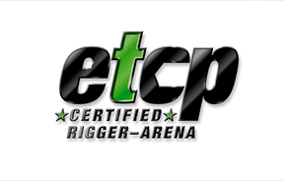