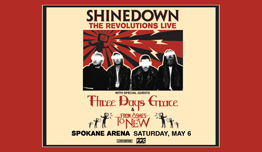 Multi-platinum, chart-topping band Shinedown has announced their upcoming The Revolutions Live Tour (co-produced by FPC Live and Live Nation) with support from fellow chart-toppers Three Days Grace and From Ashes to New. The Revolutions Live Tour will stop in Spokane, WA on Saturday, May 6! Fans won’t want miss the record-breaking band bring their hit album Planet Zero to life live from coast to coast.

The Planet Zero album debuted in the Top 5 on the Billboard 200 Chart and the Official UK Albums Chart, and at #1 on six other Billboard charts including Top Album Sales, Rock, Hard Rock, and Alternative Albums Charts. Featuring searing and incisive tracks like "Dead Don’t Die" and #1 rock hit "Planet Zero", as well as uplifting and unifying songs like the soaring pop-rock anthem and #1 rock hit "Daylight" and "A Symptom Of Being Human," Planet Zero boldly confronts the societal forces that perpetuate divisiveness while offering a restorative path forward through empathy and open conversation - ultimately serving as a reminder that it is our human connections that matter the most. The band's video for “Daylight,” set to the Amazon Original version of the song, is a love letter to their fans and shows the impact that the song’s message – that you are never alone - had during Shinedown’s sold-out Planet Zero World Tour.

Additionally, Shinedown recently received an iHeartRadio Music Awards nomination for Rock Artist of the Year as well as for Rock Song of the Year for “Planet Zero.”

Shinedown has partnered with PLUS1 so that $1 per ticket goes to supporting the American Foundation for Suicide Prevention and their mission to save lives and bring hope to those affected by suicide.