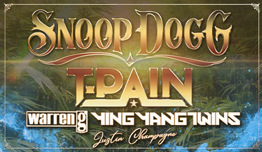 After performing at one of the most epic halftime shows in history, Snoop went on tour earlier in 2022 selling out arenas across the country. He is now back out to bring a very special holiday show where he will be touring with a full band for the first time in years! This is truly a one-of-a-kind show that you do not want to miss!

This epic lineup includes two Grammy Awards-Winner T-Pain, who recently proved to the World that he, in fact, does not need auto-tune when he shocked fans with his incredible voice as he won The Masked Singer in 2019. It also will feature the living legend and original regulator, Warren G who joined Snoop on tour earlier this year. If that weren’t enough, Ying Yang Twins will complete a set packed with countless chart-topping hits that are sure to keep the audience up and jumping all while setting the stage for this incredible party. And of course, kicking everything off is the rising star out of Lafayette, LA, Justin Champagne, who recently released the popular If She Ain’t Country with Snoop Dogg. Fans are encouraged to get their tickets early as these shows are sure to sell out quick!

Tickets range from $49.00 to $199.00 and are on sale now at TicketsWest.com. A limited number of VIP packages and experiences will be available.