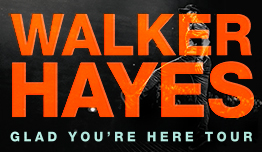 Monument Records recording artist, Walker Hayes, is a singer/songwriter originally from Mobile, Alabama. His album Country Stuff The Album came out 1/21, and features new single “AA” and smash hit “Fancy Like.” “Fancy Like” has topped every sales and streaming chart since its release, spending a collective 6 months and counting at the No. 1 spot on the Billboard Country Songs Chart and hitting the top 5 on Billboard’s Hot 100 Songs. The irresistible tune was certified RIAA3X Platinum within a year of release, and the track gave Hayes his first GRAMMY Award nomination as an artist for Best Country Song.