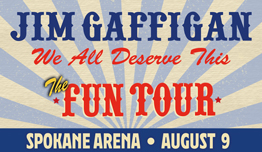 Jim Gaffigan has announced additional tour stops to his 2022 The Fun Tour, which will include a stop at Spokane Arena on August 9! Presale begins Thursday, March 17th at 10am and tickets will go on sale to the general public beginning Friday, March 18th at 10am at TicketsWest.com.

A top ten earning comedian according to Forbes’ 2019 comedy list, Jim recently released his 9th stand-up special, Comedy Monster, on Netflix, which was hailed as “dynamite,” and “his best special,” by NY Times. He was also recently awarded for being the first comedian to reach one billion streams on Pandora.